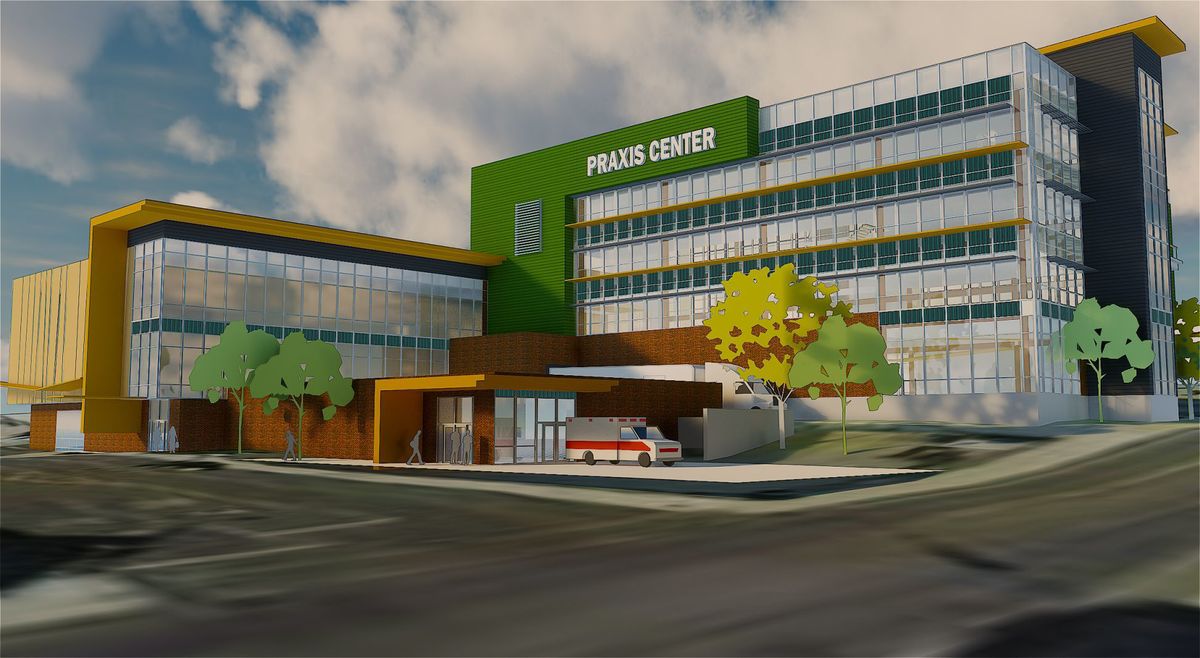 Through friendship and a deep desire to leave a legacy to their hometown, two “Butte boys” are establishing a $35 million medical training center here to bolster hands-on health care in rural areas of the U.S. and beyond.

It should bring 3,000 to 4,000 doctors, nurses, technicians, first-responders and others here each year to learn and hone skills using high-tech mannequins, imaging simulators and virtual-reality settings and scenarios.

It will create about 70 new jobs, 50 full-time, at a sprawling, four-story complex at Park and Arizona streets. One-third of it will resemble a rural hospital inside and out, with an emergency room, intensive care unit and even a helipad.

The project, announced and detailed publicly at a Monday news conference in Butte, has been extensively vetted.

They have a financing partner, a major vendor to provide simulation equipment, training and curriculum, and backing from Montana politicians at every level, including U.S. Sen. Jon Tester, Gov. Steve Bullock and Dave Palmer, Butte-Silver Bow’s chief executive.

They have agreements lined up to buy the site, and though it could take six to nine months more to finalize all details, they expect construction to start early next year and doors to open in 2020.

They have chosen Butte-based Markovich Construction as their general contractor and CTA Architects, which has offices in seven Montana cities, for design and engineering work. Some of that has already started.

They have tapped CPA Shelly Davis as their chief financial officer. She has overseen money matters for Butte Broadcasting Inc. since she and her husband, Ron Davis, founded it in 1994.

They’ve had extensive discussions with state and local officials and been helped by many, with key support from Butte’s Pam Haxby-Cote, who is now director of the Montana Department of Commerce.

And since they started down this path a decade ago, they have never wavered on its location.

“We were stubbornly obstinate that we wanted it in Uptown Butte,” Dudley said. “We are Butte boys. We want it here.”

The premise behind the project is simple: Need.

There are many centers in the U.S. and abroad that now use high-tech mannequins and simulations to train health care practitioners, and the demand and market is growing. But they’re usually in just two places.

If rural health workers manage to get into those facilities, Dudley said, they are treated like “second-class citizens” who take a back seat to students or staff of those universities or teaching hospitals.

“They take care of their own,” he said.

That leaves rural practitioners with no place to go, since smaller hospitals can’t even afford the equipment. High-tech mannequins — the kind that bleed and breathe and give birth — can cost $30,000 to $250,000 each.

The Praxis Center will be that place to go, since hospitals will be able to afford the training there.

“So it’s just market availability, and we are the first entity that has looked at establishing an independent, nonprofit training center to do simulation,” Rogers said.

Dudley has a friend whose brother is an ER doctor at a medical center in Chicago.

“His specialty was knife wounds,” he said. “He didn’t do gunshot wounds. He did knife wounds.”

At rural hospitals, a day’s work can be hugely varied. It might include a gunshot victim followed by someone who fell underneath a tractor.

“They said, ‘We love this concept, we love what you’re doing and we will provide support to you once this gets up and running,’” Rogers said.

And the support crosses U.S. borders.

“The intent is that it’s going to be an international center,” Dudley said. “Canada is interested. When you talk ‘rural’ with them, they always say, “You don’t know rural.”

As co-founders of the National Center for Health Care Informatics, they got $3 million in federal funding to develop simulation training for the U.S. Air Force Pararescuemen — Air Force special ops personnel who have advanced medical training.

“Not only do they have to fight in combat, they have to be able to treat somebody while somebody is firing at them,” Dudley said. “That is where we cut our teeth on simulation.”

At the center, high-tech, lifelike mannequins will play a huge role.

They are physiology driven, so they can have a pulse, bleed and breathe, among other things. You can administer drugs to some of them. One used for the pararescuemen was a trauma mannequin with an amputated leg.

“It would bleed out of the leg and if you applied a tourniquet, the bleeding would stop and the vitals would improve because it is all based on this physiology model that is running inside of it,” Rogers said.

“They are very, very sophisticated and it is really the cutting edge and latest technology for training our medical personnel,” he said. “One of the nice things about simulation is you can practice something over and over again until you get very good at it — in a risk-free environment.”

Every room will have a two-way mirror so observers can see in without being seen themselves. Everything will be recorded so audio and video can be played back and trainees told what they did right and what they did wrong.

That and other features is why the center is called “Praxis” — an old Greek word meaning “reflective learning.”

The center will run its own temporary staffing agency to “backfill” positions at rural hospitals while their workers are at the center. Most agencies require minimum 13-week contracts, but average training stints at the center will be one to three days.

The Praxis organization will also provide “soft skills” training to help nurses and others manage stress and avoid burnout. That drives many out of the profession, resulting in a manpower crunch that is getting worse.

The last recession kept many nurses in the field because they couldn’t afford to quit, Dudley said, “but now they are leaving in significant droves.”

Dudley will help develop courses, seminars and distance-education opportunities to address that.

They expect 3,000 to 4,000 people a year to get training, with most courses listed weeks to months in advance.

The center will be 82,000 square feet, one-third set up like a rural hospital, with an emergency room entrance and ER, an intensive care unit, a delivery room, operating room and nursing unit. A helicopter landing pad will allow life-flight scenarios to be played out.

One 10,000-square-foot section will have a 40-foot ceiling to accommodate large-scale, mockup scenarios for military personnel, EMTs and first-responders.

A roadside car crash could be set up, with “virtual” people screaming and cars zipping by. One done for the Air Force resembled an Afghan village, and the U.S. military has expressed significant interest in using the center.

There will be an imaging suite where procedures such as cardiac and abdominal ultrasounds can be performed, as well as “fast scans” that provide quick, ER assessments of internal injuries.

A surgical suite will offer training for endoscopic and arthroscopic procedures, among others.

“We will have another room called the home-scenario room,” Rogers said. “It will look just like someone’s living room so we can do home births or scenarios for EMTs and first-responders in the home.”

There will be conference space for 200 to 300 people, which could be combined with space already in place at NorthWestern Energy’s newer Montana headquarters building.

“We could potentially bring in much larger conferences to Uptown Butte by combining these two facilities,” Rogers said.

They have already received funding from the U.S. Economic Development Administration and gotten support from the Butte Local Development Corp. to put a “business accelerator” in the building.

As many as 25 offices will be available for start-up companies, which will get mentorship and support for accounting, human resources and IT services.

“The goal, of course, is to spin them off into our economy to create more businesses in Butte,” Rogers said.

Buy-sell agreements are in place for property at the corner of Park and Arizona, where the center will be located, as well as land at Arizona and Mercury, where a parking lot with about 100 spaces will go.

The project will cost an estimated $35 million — $28 million for construction, the rest for equipment and startup. Mountain Plains Equity Group Inc. in Billings will finance most of that, with details hopefully finalized this summer.

Some outside funding will be sought, including a request for $200,000 in Hard Rock economic development funds from the county. Rogers and Dudley plan a presentation before commissioners Wednesday night.

The center will be built to high energy and environmental standards and designs will incorporate “lots of Butte and the flavor of Butte” as was done at the new passenger terminal at Butte’s airport, Rogers said.

A precise ground-breaking date hasn’t been set, but they are aiming for early 2019. It will take about 15 months to build and about two months to commission, so plans are to open sometime in 2020.

You can login using your social profile
Problem with login?